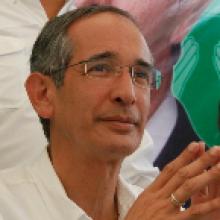 Assuming the presidency on 14 January, Alvaro Colom highlighted the call for national unity in his inauguration speech and reiterated the need for dialogue and trust in Guatemala.

Reaffirming his campaign promises, the President emphasised that the new administration would be based on social democracy and would have rural development and national security as its cornerstone.

Candidate for the National Union for Hope (UNE), which is set to become a member of the Socialist International at its next Congress, Colom was elected in November 2007 with 52.8 per cent of the vote.