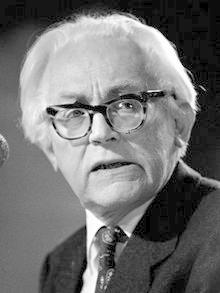 The Socialist International honours Michael Foot, former leader of the Labour Party, who died on 3 March 2010, aged 96.
The SI was saddened to learn of the passing of Michael Foot, whose honesty, idealism and compassion, admired by friends, colleagues and political rivals alike, were a striking example of the heights to which politicians can aspire. Tributes paid to him, which have come from all sides of the political spectrum, are a testament to a man whose sincerity and sense of principle transcended party lines.
No homage to a man who contributed so much to the fabric of British politics over so many years could do him justice without mention of his oratory genius, as alluded to by Gordon Brown, who called him ‘one of the most eloquent speakers Britain has ever heard.’ He was also a prolific writer, the depth and distinction of his literary output revealing a politician inspired by the works of Byron, Shelley and Keats amongst many others, and we can be grateful that his legacy will live on through his powerful and persuasive words.
Michael Foot was a man unafraid to fight for the causes he believed in, unwilling to compromise on matters of principle yet pragmatic in the way he set out to achieve his objectives. He stood firstly against the evils of fascism, and later campaigned against the danger of nuclear weapons, remaining throughout his life a fervent advocate of the principles of peace, freedom and social justice, causes that remain integral to the work of our International today. He will be sorely missed.