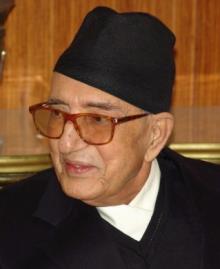 The Socialist International pays tribute to the life and achievements of Girija Prasad Koirala, former Prime Minister of Nepal and President of the Nepali Congress Party, SI member in that country, who died on 19 March 2010, aged 85.

G P Koirala dedicated his life to bringing peace and democracy to Nepal, and remained committed to that cause, engaged in the process of securing a new constitution up to the time of his death.  Politically active for over sixty years, he was imprisoned and exiled on numerous occasions for his pro-democracy views under the autocratic regimes of the 1950s, 60s and 70s.  Following street protests by the Movement for the Restoration of Democracy, he was elected Prime Minister in May 1991 in the country’s first democratic elections, a role he would occupy a further four times.

G P Koirala equally played an active role in the activities of the Socialist International, demonstrating a commitment to the shared social democratic values of our global movement.  His long personal struggle and charismatic leadership are an inspiration to our International, and to all those who believe in the fundamental causes he championed.

His role as the architect of the Comprehensive Peace Agreement (CPA) of 2006 that brought an end to 10 years of violence and Maoist insurgency stands out as an accomplishment that will leave a permanent legacy.  Nepal today still faces obstacles in its quest for a lasting peace and strong democracy; there could be no more fitting tribute to a statesman and leader who fought for those ideals over six decades than a swift resolution to the current constitutional crisis, paving the way to a brighter and more prosperous future for the Nepali people, possible today thanks to the contribution of a man like him.