Guinea in the ranks of socialist governments 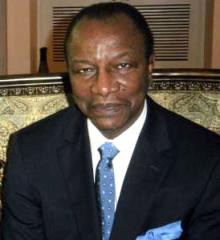 Alpha Condé, newly elected President of the Republic of Guinea, was inaugurated on 21 December at the Palais du peuple in Conakry with the presence of African heads of state, African party leaders, personalities and guests, among them the Secretary General of the Socialist International.

In the first free and democratic elections in the history of Guinea after half a century of authoritarian regimes and military coups, the leader of the Guinean People’s Assembly, RPG, a member of the Socialist International since 1999, won in the second round of elections and became the first democratically elected President since the independence of the country in 1958, ready to turn the page of Guinea’s history.

Long and hard was the road for Alpha Condé, the ‘historic opponent’, and his people to freedom and democracy. He fought all the regimes, from Sékou Touré who condemned  him to death in absentia in 1970, which forced him to remain in exile for several years, to Lansana Conté who arrested him in 1998 immediately after the presidential elections in which Alpha Condé had been a candidate,  on charges of planning a rebellion to destabilise the country. Sentenced to five years of prison, he was finally released in 2001 after repeated protests from the Socialist International and pressure from the international community under condition that he abstain from any political activity.

After his release from prison he declared that like Mandela one shall forgive but not forget. He remained in opposition and in 2008, following Conté’s death and the coup of the military junta, he called for free and democratic elections which finally took place in 2010, marking the end of authoritarianism in Guinea.