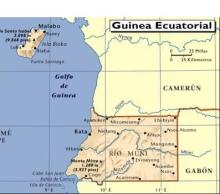 Equatorial Guinea’s leading opposition party has denounced a ‘government-led’ campaign of violence and intimidation against the Guinean people which, it says, has led to beatings, arbitrary arrests and a series of unexplained detentions across the West African country in recent days.

In an 11 May statement, the Convergencia para la Democracia Social (CPDS), asks the long-standing President and current chair of the African Union, Teodoro Obiang, to justify why the country’s authorities are turning a blind eye to human rights abuses, saying:

“It seems clear that if nothing happens to the people who are violating the rights of the country’s citizens…it is because they are carrying out orders from above, and more specifically, from President Obiang himself.”

In a separate statement, the CPDS highlights a number of cases of abuse against individuals, including the serious and unexplained assault of a 36-year-old man by an infamous member of the military in the city of Kogo, amongst others.

The current string of human rights violations comes as President Obiang’s party attempts to carry out sweeping constitutional reforms, including the creation of a new committee for the Reform of the Fundamental Law of Equatorial Guinea. The move is billed as an attempt to create broader opportunities for Guineans to participate in the management of their country.

Opposition parties, including the CPDS, Acción Popular de Guinea Ecuatorial (APGE) and the Unión Popular (UP) have declined an invitation to take part in the committee, saying the process of reform is fundamentally flawed.

The CPDS adds that, in light of recent acts of violence and intimidation against the population, it has ‘sincere doubts’ about what the Guinean people should expect from constitutional reform altogether.

Socialist International denounces in the strongest terms the unacceptable violence being levelled at the people of Equatorial Guinea saying: “The Obiang regime has for too long held the balance of political power following years of authoritarian rule in the absence of free and fair elections.

“Though we welcome attempts at constitutional reform, it seems unlikely that the Guinean people will be able to make their voices heard, particularly when they are facing threats at the hands of their own government. We support the CPDS and opposition parties in their decision not to back this process.”


Socialist International condemns the sentencing in Equatorial Guinea of Plácido Micó, Secretary General of the Convergence for Social Democracy, CPDS