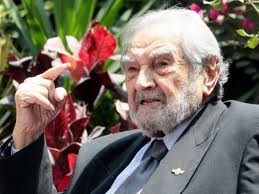 Born in Lima, Armando Villanueva, a fervent social democrat, began his involvement in politics at an early age. Opposing the Peruvian dictatorships of the time, he worked with Víctor Raúl Haya de la Torre, founder and leader of Peruvian American Popular Revolutionary Alliance (APRA). He joined the party aged just 15 and shortly after established the APRA’s Aprista Youth Movement (Juventud Aprista Peruana). Amongst his many achievements, he would later also become known for his dedication to youth in politics.

Armando Villanueva sought a government for the people, one that would ensure well-being and equality for all Peruvians, but his political campaign was to be frequently challenged. A failed coup attempt against Óscar Benavides in 1934 resulted in his imprisonment in El Frontón, an island jail off the coast of Peru. Undeterred he returned several months later to organise the Aprista Youth Movement’s first Congress.

Armando Villanueva graduated from the University of San Marcos but was subsequently imprisoned again for his political activities and in 1940 exiled to Chile. He was repeatedly exiled during the forties and early fifties, to Chile, where he met his wife, and to Mexico and Argentina. He remained resolute and continued to work and write, as well as serving as General Secretary of the Coordinating Committee of the Apristas in exile. In 1955 he re-gained entry to Peru. In 1963 his indefatigable political spirit was rewarded when he was elected Member of Parliament in Lima, and in 1967 he was elected President of the Chamber of Deputies. In 1979, APRA gained political legitimacy in Peru and Armando Villanueva led and continued the party’s advancement after Haya de la Torre died. While APRA grew, Armando Villanueva was in 1980 the party's candidate for the Presidency of the Republic. Although unelected, in 1985 he was elected Senator of Peru and, in 1986, he became President of the Senate. His consistent politics and vision of democracy and freedom for all earned him wide-ranging respect in Latin American politics. Armando Villanueva further presided over the Commission of Foreign Affairs of the Chamber, President of the Council of Ministers and Minister of the Presidency. At aged 73 he carried out the role of Ministry of the Interior and a year later he was re-elected as Senator. So dedicated in his beliefs, Armando Villanueva was working on recommendations for political policies to improve health and education for Peruvian people, in his final days.

During his lifetime Armando Villanueva gained a remarkable list of achievements, awards, publications and distinctions. He assisted in the progression of the Rio de Janeiro Protocol of Peace in 1991, was elected President of the Ayacucho Forum in 2004, and was a representative in Peru in for the Human Rights Commission in Geneva. He excelled in journalism and was awarded Medals of Honour by Peruvian journalist associations. In the early 1950’s, during exile in Argentina, he was editor of the Síntesis Económica Americana, and later, in Chile, he wrote for Los Tiempos and Última Hora and was the director of Panorama Político.

Armando Villanueva del Campo’s unwavering commitment to a fair society, for freedom and social justice, is a legacy that extends beyond borders and one that will accompany those in the struggle for democracy across Latin American and other regions. Our dear comrade, collaborator and friend will be deeply missed by members of the SI family across the globe.