Extraordinary meeting of the SI Committee on Migrations 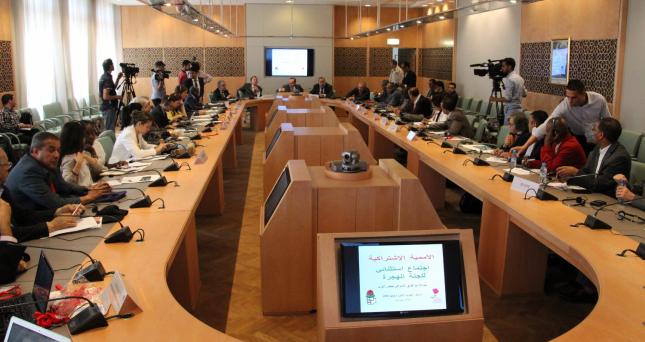 An extraordinary meeting of the SI Migrations Committee was held in Rabat on Monday 1st June, to focus on a social democratic response to the migrations crisis unfolding in different parts of the world. The meeting took place at the Moroccan Parliament, hosted by the Socialist Union of Popular Forces, the USFP.

The Committee, chaired by Habib el Malki (USFP), focused on three key themes: a. Asylum seekers and migrants fleeing conflict and violence: the obligation of the international community to save and protect; b. The moral and humanitarian responsibility to address the plight of migrants escaping poverty and hunger; and c. Building a response to the current crisis based on our values and principles.

Driss Lachguar, First Secretary of the USFP, addressed the opening session. He highlighted the need for a roadmap to develop a comprehensive new approach to today’s migrations phenomenon which is not only due to economic factors but also a consequence of the ideology inherited from the cold war, fuelling instability and insecurity, and the correlation with arms merchants and those who finance terrorism. He emphasised the diversity of Morocco with its Moorish and Jewish heritage from immigration in the 16th century and regretted the lack of a medium or long term strategy by today’s government in Morocco to effectively deal with this problem.

The meeting also heard a contribution from Driss El Yazami, from the National Council of Human Rights in Morocco who outlined the mutations in migrations over recent decades. He emphasised the current diverse nature of migrants, including those with university degrees and today’s high number of women and children, and pointed out that today all countries in the world are affected and all are countries of departure. He also highlighted that the use of migration as a tool for political campaigns should be a subject of debate, as well as the key issue of international governance and the rise of xenophobia.

The SI Secretary General, in concluding the opening session, recalled the point that human history has shown that migration is a source of wealth both economically and culturally and in today’s crisis too many people are being denied fundamental rights and too many states are not respecting them. The level of injustice today is immense, bearing in mind the millions displaced by wars, conflicts, persecution, famine and economic hardship. He particularly underlined the need, in facing this crisis, to act in accordance with the values that unite our movement and constitute our identity, and to work for political and human solutions rather than to rely on the use of force.

Outlining the tasks ahead, the Committee chair emphasised the urgent need to come up with a plan of action; to agree on a diagnosis of the situation in different parts of the world to identify the true causes of the circumstances in order to deal with the origins rather than the consequences; to treat the migrations phenomenon as a symptom of the chaos and institutional destruction we see in many states; to seek solutions other than military ones which are repressive; and to take a fresh look at the concept of security, placing people at the center.

As a specially invited guest, Tun Khin, a Rohingya activist recognised internationally, made a presentation on the history and plight of the Rohingya people, an ethnic group in Burma who are denied nationality. Of a population of 3.5 million, more than1.5 million have been forced to flee their homeland in Burma due to persecution and violence against them. Presently, 8,000 Rohingya people are stranded on boats at sea, being turned away from neighbouring countries. He stressed the importance of addressing the root cause of this displacement of his people.

During the discussions, it was recalled that although the focus was currently on the plight of migrants at sea, migration was also a matter of crossing the desert where many people in Africa died. While emphasising the benefits of migration, it was pointed out that migration itself was not the problem, it was illegal migration that needed to be addressed. There was also a perceived need to bridge a link between migration and development and to adopt programmes for the transfer of technology to stimulate development where needed. Globalisation and the IT revolution had been expected to bring progress, but in some cases it had brought terror, wars, tanks and more deaths. Greater political efforts were required by the international community to work towards liberating oppressed peoples. With regard to Europe, the need to share the burden was emphasised as well as the need to urgently act to save lives.

Formulating an approach that is gender based was underlined, bearing in mind the high number of female migrants and their particular vulnerability to abuse.

At the conclusion of its discussions, the Committee adopted a Declaration and agreed to continue advancing with the Charter of the Rights of Migrants, whose elaboration had begun at previous meetings, with a view to presenting it for adoption at the next Council of the Socialist International due to take place at the United Nations headquarters in New York on 6-7 July. The objective of the Charter is to provide a code of conduct for political action by member parties.