Meeting of the SI Committee on Migrations, Tangiers, Morocco 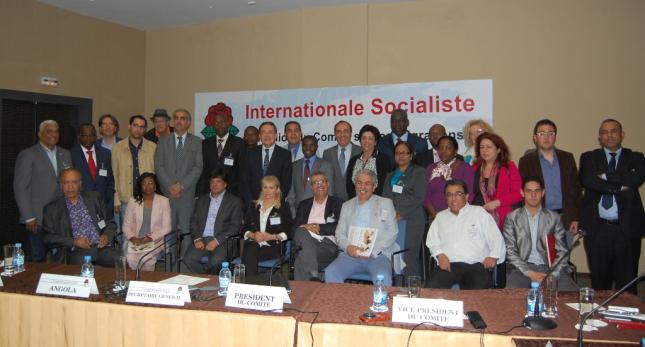 Under the main theme of “Humanising Migration”, the SI Committee on Migrations convened in Tangiers, Morocco, on 2-3 May 2014, hosted by the Socialist Union of Popular Forces, USFP. In a widely attended opening session, the gathering was addressed by Driss Lachguar, First Secretary of the USFP, Abdallah Boussouf, Secretary General of the Council of the Moroccan Community abroad, CCME, and by Luis Ayala, the SI Secretary General. Representatives from member parties in Algeria, Angola, Dominican Republic, Greece, Iraq, Italy, Mali, Morocco, Palestine, Spain and from SI Women attended.

Being the constituent meeting of the Committee since its re-establishment by the Council, the Committee’s first task was to elect its Chair and Vice-Chair for the current inter-congress period. Habib El Malki of the USFP, a former Minister of Education and of Agriculture in two previous governments of Morocco and currently Chair of the Administrative Commission of the party, was subsequently elected as Chair of the Committee, and Marco di Lello, National Coordinator of the PSI, Italy, and Chair of the Parliamentary Group of the party, was elected as the Vice-Chair.

The discussions focused particularly on the crisis of migration in the Mediterranean and North Africa. The East-West dimension of migration was also on the agenda as well as the priorities on this issue in the Americas, including at the same time, perspectives from other regions. The serious situation of the refugees forced to flee armed conflicts in different parts of the world equally received special attention, and a call was made to reinforce efforts in the search for peace.

It was agreed that the positive results of the migration phenomenon needed to be emphasised in order to counter the growth of xenophobia and extreme political positions, as was the need to support efforts in all parts of the world against the mafias trafficking in human beings and to work to promote full respect for the human rights and dignity of all migrants. The situation of migrant women and girls was also highlighted, being particularly vulnerable to sexual exploitation.

The Committee agreed that the SI should convey to the United Nations the need for the subject of migrations to be included in the new post-2015 objectives of the millennium development goals. It also agreed to develop a Charter on the Rights of Migrants, for which parties of the SI would be invited to contribute.

At the conclusion of the meeting, the Committee adopted a Declaration of Tangier, outlining its discussions and goals. In terms of its future programme of work, the Committee agree to hold its next meeting in September in Italy, hosted by the PSI.


MEETING OF THE SOCIALIST INTERNATIONAL COMMITTEE ON MIGRATIONS
Tangiers, Morocco, 2-3 May 2014


DECLARATION OF TANGIERS
Original: Spanish
The Socialist International Committee on Migrations, meeting in Tangiers, Morocco, on 2-3 May 2014, under the theme of “Humanising Migration”:

Expresses its appreciation to the host party, the Socialist Union of Popular Forces, USFP, for the kind hospitality received during the event, for their invaluable help in the organisation of the meeting and the symbolic importance of bringing the Committee to the emblematic city of Tangiers.

Recognises the suffering of those refugees who find themselves forced to flee the armed conflicts in countries like Syria or Central African Republic, and calls on the parties involved to advance efforts in the search for peace.

Declares its satisfaction that in places like Angola and Kurdistan once the conflicts were over, their citizens have been able to return to their countries of origin because the causes that led them abandon their homes had disappeared.

Convening in the region of the Mediterranean that experiences South-North migration, it deeply regrets the deaths of people drowned in this Sea and encourages the coastal states to undertake all means and efforts necessary in order to avoid the further loss of lives. At the same time, it recognises what is already being done by many of the countries concerned as well as by the European Union through their different programmes.

Highlights the efforts undertaken by some countries to manage immigration and in this respect, it supports the efforts by Morocco to regularise the situation of the immigrants in its territory.

In the conclusions adopted by the participants, IT WAS AGREED

1. To highlight the migration phenomenon as a positive fact, for economic development as well as for cultural exchange, as it helps to redress the demographic imbalances and, in particular, the low birth rates in the host countries, mindful that all analyses and opinions should also take into account the inherent risks involved in the countries of origin at the loss of human capital and brain drain.

2. To recognise the right of people to emigrate in search of a better life as a universal but limited ius migrandi, and at the same time this must be combined with the right of states to develop migratory policies that channel the migration flows in accordance with the needs and capacity of the host countries.

3. To support the fight of all countries against the mafias engaged in the traffic of human beings and against irregular immigration but, at the same time, to demand the most scrupulous respect for the human rights and dignity of all immigrants, including those who attempt to enter another country or to remain in a country under irregular conditions, as well as the provision of means for defending borders and the priority that should be given to life and to the physical integrity of people.

4. To express concern at the growth of xenophobic political positions, or those that lay the blame on immigrants, such as the case of the recent referendum in Switzerland, trying to unduly restrict the movement of peoples or their rights, and stigmatize the immigrants.

5. To promote a full integration of all foreigners in the host countries by means of policies directed at the entire citizenship with strategies that guarantee equality of rights, duties and opportunities, strengthening the foundations for coexistence and social cohesion based on the principles of equality, non-discrimination, citizenship, inter-culturality and inclusion.

6. To consider recognising the right to vote of immigrants integrated in the host countries after a reasonable length of time, and to facilitate access to nationality through residence.

7. Under the principle of solidarity, to guarantee to people who are in imminent need of refuge or who come directly from countries in conflict situations or from refugee camps in border countries, the right to asylum and international protection, and to foster agreements for their safe passage to secure territories.

8. To incorporate international cooperation and development cooperation which affect the management of migrations, based on the principles of joint responsibility and solidarity, in order to gain an integrated approach to the different facets when dealing with the phenomenon of migrations.

9. To take a special consideration of the migration of women which, in accordance with the latest data, represents more than half the total number of migrants, as well as to address the risks of subjecting women to networks of trafficking in human beings for sexual exploitation, something which calls for the implementation of specific protection measures.

10. To acknowledge the role of migrants organisations and of civil society as facilitators of the processes of integration and sensitising public opinion to this phenomenon.

11. To consider that the subject of migrations must be addressed at global level, and therefore within our debates and meetings of the Socialist International, given that the scope of the theme transcends national policies as it also does in many respects, international regional organisations.

12. To encourage all the instances within our organisation to influence the socialist and social democratic governments and parties to assume the ideas and values expressed herein, to transform them into laws and to incorporate them in the development of their public policies.

13. To request that our organisation convey within the framework of the United Nations the need for the theme of migrations to be included in the new objectives of the millennium post-2015. To this end, a joint work will be undertaken asking for contributions from all the members, in order to prepare a draft Charter of Rights of Migrants, which will be presented at the next Council of the Socialist International.